So finally the wait and apprehensions have ended with the preview of the Beta versions of Android Q. This is the latest software update for Android mobile OS. Android Q brings with it user experience par excellence by bestowing the trendiest of capabilities in the hands of the users. There is a lot of curiosity as what will be the full form of Android Q; some say this while some say that. It could be called “Que aka Quintessential” due to its amazing and exemplary features that we will relate to in this article. 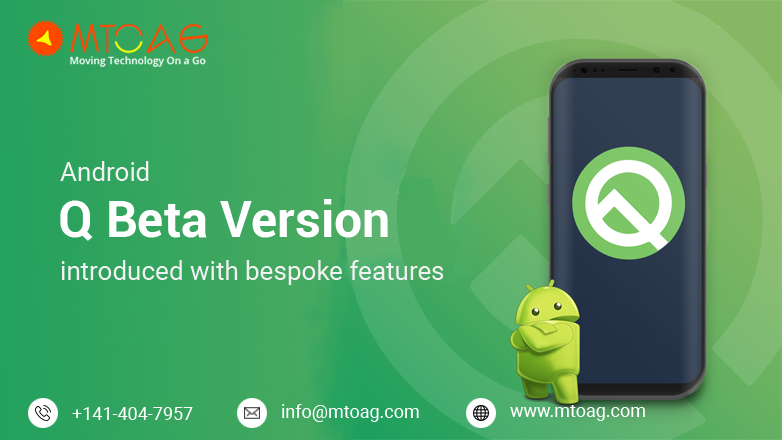 Android Q has upped the ante for enhanced privacy protection for its users. Google now offers more control over the information you share with your mobile apps. Apps will hereafter require explicit permissions for location access; lock down of background access to videos, photos, audios; information gathering in the background, etc. due to the new features for runtime permissions. Are you looking for the best android app development company then contact us. Further essential advanced features include encrypted backups, file-based encryption, stringent Google Play Protect amongst others. Sharing details on device identifiers such as IMEI serial number also figure in the privacy features. Users can also see and filter the permissions accorded to which of your apps through the App Info page via Permissions Usage page in Settings.

The Android Q Beta versions have improved Android Q Runtime thanks to cloud-based profiles of APKs to hasten up the apps performance levels while using lesser memory in doing so. Through the Zygote process, the Android Q OS can initiate the app’s process and send it to a security container to start up instantly.

With the advent of large and foldable screen phones in the market by Samsung and Huawei, Android Q has ushered in native support for multi-screen form elements. We offer the best Android App Development services at affordable prices. This will enable an innovative experience for users. In tablet mode you will be able to view 2 apps simultaneously side-by-side. With the help of the Android Emulator, apps will be able to automatically switch modes and render seamlessly according to the screen size. Android Q is now enthused with features to change to onResume & onPause for supporting multi-resume aspects and notification for the app to focus as needed. To better manage the display of apps on such large/foldable screens, Google has altered the functionality of resizable activity manifest attributes. Though these features are meant for developer, but ultimately it should be suitably optimized to render correctly on these large mobile device screens.

With introducing the above option, sharing content will become very fast in Google’s Android Q. Previously users were hassled by the slow performance of sharing content from one to another, even though the core functionality was working fine. Now developers will be able to create a new option in the said menu for sharing a photo, file, video, etc. to a particular part of a different app but with better agility than before. The features of Sharing Shortcuts are similar to the App Shortcuts menu option.  If you are searching for technology news website then contact here.

Users will experience an improvement in the Wi-Fi performance with Android Q. They will also be benefitted by the low-latency mode during their usage of IoT connected devices via different wireless connections without bothering about location permissions. Another feature is the sharing of Wi-Fi details through a QR code to allow others to connect through your Wi-Fi network.

Google’s Android Q. will be lending support to the new file format called Dynamic Depth which contains a JPEG file and XMP metadata which would allow third-party apps to provide better depth elements in images. The new format will be using a single file containing depth, confidence map and present specialized bokeh and blur options that would help in creating AR photography and 3D images. 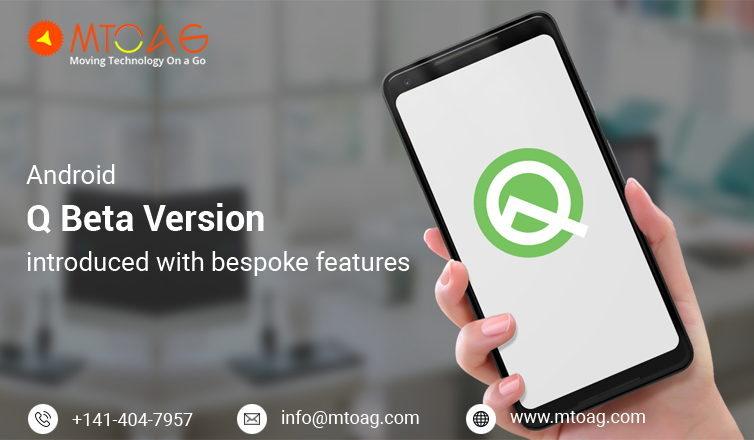 Finally we have it! After multiple requests Google’s Android Q. We are the affordable mobile app development company in USA, india to make better apps in Ios/Android at simple cost.
.has finally brought in the much wanted spectacular feature of built-in screen recording. This feature allows the user to natively record the screen video with an option of adding a voiceover through tap friendly indicators on your smart devices. Though this option might be a bit dicey to find for a novice, as of now, it is safely bellied in the developer options. It is hoped that when the final version of Android Q is released, this option would be more user friendly and easily accessible. HIRE ANDROID DEVELOPERS at very easy cost to build custom app.

Android Q. has gone all the way out to enhance user experience. Now users will be able to truly customize their phones with themes, colors and changing of font, etc. for their smart devices. The feature is in the developer option section from where the entire UI’s accent color can be changed. Default color is blue and you have choices of 3 colors – purple, green and black to change as per your liking. Users can also change icon shapes from the default system pattern of circle to teardrop or rounded rectangle. Noto Serif font is the only option available for changing of font style.

This is the most attractive mode brought forth in the Beta 2 version of Android Q. The theme has an option named ‘Set Dark Mode’ that can be regulated through different commands such as ‘Always On’, ‘Always Off’, as well as auto mode to turn on or off as per daylight settings. The dark theme depicts a magnificence that is seen to be believed. click here to know about best digital tech news website. It envelops the settings page, volume controls, quick settings, and many more viewable options in the smart devices. There is also a developer setting namely ‘override force-dark’ for setting applications in dark mode themes. The thing to be seen is what would be the state of affairs of those sites which are sans dark modes. Nonetheless, the dark themes are here to stay and look superbly attractive.

Bubbles are a new notification feature in Android Q. They help users in multi-tasking from any page in their device. The bubbles float above other app content and seem to follow the user wherever he goes on the smart device. Know & learn the best features of Android Pie. The bubbles contain app functionality and information which is visible when the bubbles are expanded and the bubbles can even be collapsed when not in use.

Mtoag Technologies is a well known web and mobile app development company whom you can associate with for android and iOS app development. We are just a call away or you can also email us info@mtoag.com.